To share your memory on the wall of BRENDA PATTERSON, sign in using one of the following options:

Receive notifications about information and event scheduling for BRENDA

We encourage you to share your most beloved memories of BRENDA here, so that the family and other loved ones can always see it. You can upload cherished photographs, or share your favorite stories, and can even comment on those shared by others.

Posted Jan 15, 2020 at 01:34am
I have fond memories of Mimi. I remember how she would be there for me and Leia when we lived together. No matter what we needed, advice or a ride or anything, she was there.
She was also very considerate. During one of Josh’s deployments I was homesick and lonely so I came to stay with Leia. Mimi came over and had bought me a Texas license plate keychain with my name in it! Something so little that meant so much. So thoughtful!
She always made me laugh, always asked about Josh and my brothers, and always made me feel included. I felt like part of her family and also like I was one of her friends.
I loved the way she said she had to “dust” her cigarette (most people say ash).
I loved the way she could be very direct with people.
I loved how she set an example of how to be accessible and supportive to the ones you love.
I’ll miss her accent.
I’ll miss her pointed questions. Her recommendations. Her challenging me on her exercise bike.
I‘ll miss Mimi, Leia, and I chilling on her bed with her dog, Micah, discussing memories, paramours, family and Roy Williams.
Most of all I’ll miss the times I didn’t spend with her, bc those are truly gone.
She told me several times over the years that life is too short.
She is right.
A thousand lifetimes can never be enough time with the people that you love.
Comment Share
Share via:
KF

Posted Jan 09, 2020 at 12:09pm
Dearest Lori, Ricky, and Kyle, please accept our deepest heartfelt condolences on the loss of your precious mother and our beloved aunt Brenda. We are so very sorry to hear that your mom, our beloved Aunt Brenda, a Mimi, sister, and devoted friend to so many has passed away. Aunt Brenda will live on forever in our hearts. We will always cherish all the time we were able to share with her. The very first time I met aunt Brenda she was ringing her cowbell at a mojo football game! She sure did love her mojos, but most of all, she loved her family. She was full of life and love! We are lifting you and your entire family up in our thoughts and our prayers. We are praying and asking God to hold you close and give you strength during this difficult time of loss. We know that aunt Brenda and daddy Charles are rejoicing together in heaven. We love you all very much and we truly loved aunt Brenda. She will be greatly missed, and until we meet her again, we will find comfort in knowing that she is enjoying eternal life with our Heavenly Father.
With all our love and deepest heartfelt condolences,
The Findley Family
Ryan, Karen, Ryan, & William
Comment Share
Share via: 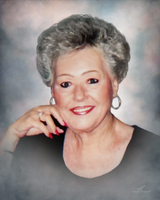