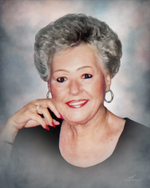 Brenda Jean Findley Patterson went to be with our Heavenly Father on January 5th, 2020. Brenda was born in Teague, TX on September 2nd, 1944. Brenda was a wonderful daughter, a great mother, and the absolute best Mimi to her grandchildren and great grandchildren.
Brenda retired with Medical Center Health System (MCH) in Odessa. Brenda loved football and baseball you could always count on Mimi to be at all her grandchildren’s sport activities with her cow bell ready. Mimi was the biggest MOJO fan, mainly because she was a member of the original first class when Permian High School opened in 1959. Brenda graduated from Permian High School in the class of 1962. She was proud to have helped pick out the school’s colors and mascot. Until she was no longer able, she held season tickets to the Permian football games. On Friday nights you could find her at Ratliff Stadium ringing her cow bell and cheering for her Panthers.
Brenda is preceded in death by her parents Nolan and Helen Anderson Findley; her brother, Charles Findley. She is survived in life by her daughter Lori Ferguson and her sons Ricky and Kyle Branscum. Her grandchildren Leia Hendrick; Tyler, Coltyn, Stetsyn Daughenbaugh; Lance, Cori, Deanna, Chris, Jordan, Tabitha, Aaron, Cameron, Heidi and Haylie Branscum; eight great grandchildren; nephew, Ryan Findley and wife Karen Findley; niece Tiffany Alloman.