To share your memory on the wall of DEWARD MULLEN, sign in using one of the following options:

On November 13, 1953, Deward married the love of his life Margie Nell Davis Mullen also of Fairfield and who proceeded him in death. For sixty years, their marriage was a true partnership pastoring churches throughout Texas in Nacogdoches, Crockett, Arlington, Picton, Huntsville and Frankston.

Deward was preceded in death by his parents Clint and Lucy Mullen, brothers C.L. and Bowie Mullen, sisters Ida Minchew and Ada Baker all of Fairfield and sister Francis (Cutie) Harper of Tyler. He is survived by his brother Perry Clois (Buddy) Mullen of Fairfield, and sisters Mary Lois Estes of Crandall and Nova La Flowers of Fairfield, his children Jerry and Margaret Mullen, Nina and Randy Burgett, Reba Bateman, Lola Hampton and Dana and Gigi Mullen as well as twenty grandchildren and twenty great grandchildren and three great-great grandchildren. In addition, Deward leaves behind a host of nieces, nephews, great nieces and nephews and an untold number of close friends upon whose hearts and lives he left an indelible mark.

Deward, known to most as simply D, was a fearless man of God first and foremost. Among his many accomplishments, beyond increasing the Kingdom of God upon the Earth, D was an avid hunter, fisherman, domino savant and the truest of friends. His generosity to and authentic love of all people, lives on through us as we go forward in the world celebrating the passion and strong sense of purpose, he shared with each of us.

IN LIEU OF FLOWERS DONATIONS MAY BE MADE TO THE ANTIOCH CEMETERY ASSOCIATION IN CARE OF CHRISTINE EASTERLING AT 283 FM 2547 - FAIRFIELD, TEXAS 75840

To plant a memorial tree in honor of DEWARD MULLEN, please visit our Heartfelt Sympathies Store.

Receive notifications about information and event scheduling for DEWARD

We encourage you to share your most beloved memories of DEWARD here, so that the family and other loved ones can always see it. You can upload cherished photographs, or share your favorite stories, and can even comment on those shared by others.

We both go way back with the Mullen family, church , community, school. So many wonderful memories of each one.
I remember when Deward and Margie Nell were dating. What a perfect match, no doubt made in Heaven.

We thank God for letting us be raised with this family. We ask God to wrap His arms of love around each of you .
What a tribute for each one to aspire to be the person Deward Mullen was.! God Bless!
Comment Share
Share via:
NB

Thank you, Anderson’s. Our parents thought highly of you.
AR

Posted Dec 28, 2019 at 10:45am
This man of God could quote more scriptures than any one I ever knew! He would say" let us read this togather" and he would look out at the congregation and quote the Word of God.
Comment Share
Share via:
NB

Tender Tribute was purchased for the family of DEWARD MULLEN. 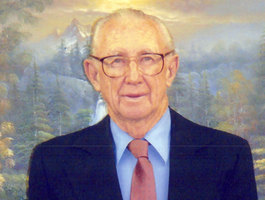