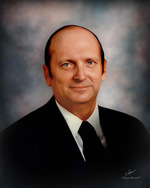 Elwood James Stucky, 86, of Fairfield, passed away to be with the Lord on Monday, April 12, 2021 in Fairfield. Mr. Stucky was born April 25, 1934 in Moundridge, Kansas to parents David B. and Anna Wedel Stucky and was the youngest of three children. He worked all over the U.S. as a surveyor before coming to Fairfield where he met the love of his life, Maxine Harris. They were married on February 22, 1969 and she preceded him in death on December 25, 2014. He went to work at Lonestar Gas as a salesman in Palestine before going to work at TUGCO where he retired from after many years. Elwood was an avid sports fan who loved all sports. Elwood loved being part of all family gatherings and holidays. He loved good food. He was a wonderful father to all five boys.
In addition to his parents and his wife he was also preceded in death by a sister, Eldeen Ann Stucky; a brother, Eugene G. Stucky and a grandson, Junior Tisdale.
Left to cherish his memory are his five stepsons, Mike Tisdale and wife Debbie of Montalba, TX; Gary Tisdale and wife Glenda of Fairfield, TX; Stanley Tisdale and wife Dottie of Hilltop, TX; Paul Marberry and wife Susan of Streetman, TX; Timmy Marberry of Wortham, TX; 10 grandchildren and 21 great-grandchildren.

SEE SERVICE AND VISITATION SCHEDULE BELOW.