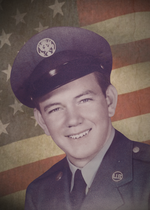 Ernest “Dale” Barker, 89, of Fairfield, passed away Tuesday, December 1, 2020 in Fairfield. Ernest Dale Barker was born on October 2, 1931 in Kerrville, Texas to parents Colley F. and Cina Newman Barker. He attended several different schools growing up, as the family relocated several times during the depression years. He attended Fairfield High School, where he starred at fullback and linebacker, on the 1946 regional championship team. He then went to work in the East Texas oilfields.
On March 3, 1951 he joined the U.S. Air Force, during the Korean War. He was stationed in Ashiya, Japan. His military career ended on March 2, 1955; he was very proud of his military service. Not long after this he married Shelby Burkhalter. To this union two daughters were born. Lana Jean in 1956, and Lisa Ann in 1958.
Dale worked in Houston for several years, first for Parker Brothers, and then for Gifford Hill. His second marriage was to Eunice Daniel Marr, whom he had went to high school with. Eunice’s son Mike was welcomed into the family with open arms. Not long after they married, they moved back to Fairfield in 1977. Dale went to work for Bobby Rutherford. Years later, he owned and operated Crossroads Country Store in Butler, with Eunice.
They lived on Burleson Lake during this time, and he enjoyed getting to fish whenever he wanted to. He and his brothers, John, Jerry and Phil were on several deer leases together during this time, and always enjoyed the times they got to spend together. After they sold the store, Eunice and Dale moved “back into town”, Fairfield. Their house was the place to go for a good game of Turkeyfoot, or 42. Dale’s uncanny knack of knowing what dominoes everyone had in their hand was always a cause of controversy during these games. His stories of his life growing up, his travels and “tall tales”, were sure to keep the listener laughing. His passing suddenly on December 1, 2020, was a shock to all. He is loved and will be missed by all. In addition to his parents he was preceded in death by a daughter, Lana Jean Barker and a brother, Forest Junior Barker
Dale is survived by his wife Eunice of Fairfield, daughter Lisa Ann and husband Dale Cates of Longview, son and daughter-in-law Mike and Laura Marr of Wylie, brothers John and wife Joann, Jerry and wife Ann, Phillip and wife Darline, all of Fairfield. 5 grandkids, 8 great-grandkids and 3 great-great grandkids, whom he adored. Numerous nephews and nieces, all who loved him very much. Pallbearers Eric Barker, Daniel Barker, Jack Barker, Austin Barker, Ronnie French and Brand0n Murrell. Honorary Pallbearers Lloyd Barker, Dalton Barker and Dale Cates.