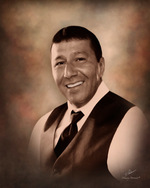 Our beloved Felipe “Phillip” Gaitan, age 59, passed away peacefully and surrounded by his cherished family on Monday, January 27th at Baylor Scott & White Medical Center in Temple, Texas. He was born September 15, 1960 in Mathis, Texas, to proud parents, Felipe and Refugia Gaitan. He was married to his longtime love and best friend of 33 years, Lisa Gaitan.
Phillip met his wife in the Summer of 1986. Just 3 weeks later, they were married and became an instant family along with Phillip’s sons, “Little” Phillip and Daniel Gaitan. Just a short time later, they welcomed daughter, Ashley Benitez. Many years later and a welcome surprise, son, John Michael Gaitan arrived.
His family and friends knew him as a one-of-a-kind family and music man with a great love for Jesus and, of course, the Dallas Cowboys. When he wasn’t cooking BBQ on game day, he could be found picking his guitar or playing cornhole with his family and friends. His pride and joy were his children, and more recently, his grandchildren. He and his wife Lisa shared a great love for one another and often spent many evenings slow dancing in each other’s arms. He was a member of River of Life Worship Center and part of the worship team where he used gifts and talents to play and worship the Lord. He was employed by Long Industries but was better well known for having worked in the supply warehouse business for over 34 years in the oil and gas industry.
Phillip was preceded in death by parents, Felipe & Refugia Gaitan; brother, David Gaitan.
He will be deeply missed and his memory survived by his wife, Lisa Gaitan, his children: son, Phillip Gaitan of Fairfield, Texas; son & daughter-in-law, Daniel & Sarah Gaitan of San Antonio, Texas; daughter & son-in-law, Ashley & Ezequiel Benitez of Waco, Texas; son, John Gaitan of Huntsville, Texas. In addition to his children, Phillip is survived by grandchildren: Angel Walker, Kylie Gaitan, Brayden Gaitan, Ella Benitez and Micah Benitez. Also left to cherish his memory are his sisters & brothers-in-law, Diana & Anthony Acosta of San Antonio, Texas; Dolly & Alvaro Carreno of Fairfield, Texas; Delma & Wayne Gilley of Fairfield, Texas; Dorrie & Paul Cobb of Fairfield, Texas. He will also be remembered by numerous nieces and nephews.
Visitation will be held at Capps Funeral Home, 113 College Street in Fairfield, Texas on Thursday, January 30th from 6 – 8pm.
A celebration of Phillip’s life will be held at River of Life Worship Center, 1201 East Commerce Street in Fairfield, Texas on Friday, January 31st at 2pm. Interment will be in Woodland Cemetery in Kirvin, Texas. All friends and family are encouraged to attend.