To share your memory on the wall of John McLeod, sign in using one of the following options:

Receive notifications about information and event scheduling for John

We encourage you to share your most beloved memories of John here, so that the family and other loved ones can always see it. You can upload cherished photographs, or share your favorite stories, and can even comment on those shared by others.

Posted May 20, 2019 at 12:00am
Ms Hilda, David, Jerry Don & family...there are NO words that can take away all the hurt and loss you all are feeling at this time, but may the Lord lift you all and wrap you in His precious arms and give you each the peace and comfort that only HE can give. I WILL forever remember and cherish my little “ A-wall” friend... who in the end...on his last day.. got to do EVERYTHING he wanted and enjoyed including driving the truck...that little crooked smile, that laugh that only he could do and hearing “gabadapentin”...Miss you my friend...
Comment Share
Share via: 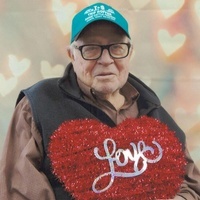