To share your memory on the wall of REED JACKSON, sign in using one of the following options:

Print
Milton Reed Jackson, local fashion icon, chocolate connoisseur and accomplished collector of "things," died on Saturday, December 26th, 2020 at the age of 78.
Reed was a lover of golf, sugar and scotch and a master of politically incorrect... Read More
Milton Reed Jackson, local fashion icon, chocolate connoisseur and accomplished collector of "things," died on Saturday, December 26th, 2020 at the age of 78.
Reed was a lover of golf, sugar and scotch and a master of politically incorrect quips. He had a hate-hate relationship with all technology post-dating 1985 and a flair for pinstripe suits with wingtips.
He was greeted in heaven by his beloved parents Milton M. and Arvetta Jackson (deceased) of Mexia, TX, who taught him about good work ethic, love of family and faith in God.
He adored his wife, Stacy, his partner in life and love of 43 years. They have four children, Brian of Corinth, Lauren Keckley of Seattle, Jordan of Frisco and Marc Pearson of Denton.
To his children-in-law, Melanie, Josh Keckley, Dianna, and Morgan Pearson, he was a revolving source of embarrassing stories about his kids, usually told with his favorite glass of scotch in hand.
He taught his five grandchildren, Miles, Hadley, Carter, Caleb and Owen about his lifelong love affair with Blue Bell ice cream and the perfect ratio of ice cream to Hershey's chocolate sauce. (80% ice cream and 80% sauce)
A Vietnam Veteran, many would be surprised to know that Reed purposely avoided the draft. How? He enlisted as a helicopter pilot (call-sign, Tweed), his way of sticking it to the man and doing things on his terms. If you knew Reed, you know that he hated being told what to do by anyone, ever.
A Marine to the end, his service fostered his deep desire to honor, serve and protect. Semper Fi - Oorah! After his years in the military, Reed was tired of taking orders. He decided to enter law school so he could finally be the boss. (naturally)
A life-long student and servant, Reed loved learning about the evolving legal system. He went as far as installing a shower in his office to use his time most efficiently. His goal, to serve all clients equally, no matter how big or small their need.
Reed's love of family extended to Fairfield's community, which he called home for the better part of 45 years. He served wherever possible, from the Fairfield City Council to various committees at the First United Methodist Church. He viewed his community and the people in it as an extension of his own family and made every effort to take care of his friends and neighbors as such.
Reed was a longtime Master Mason, it was a very important part of his life. He held many offices in both the Fairfield Lodge #103 A.F. & A.M. but also Robert E. Lee Lodge #431 A.F. & A.M in Henderson, Texas. He twice served as Worshipful Master of Fairfield Lodge. He also served in many offices in the Grand Lodge of Texas including District Instructor twice, District Education Officer, Grand Representative, District Communications Officer and District Deputy Grand Master for Masonic District 22. His Masonic service also extended to various committees of the Grand Lodge of Texas including member of the Masonic Jurisprudence Committee for eight years and Vice Chairman of the Mediation Committee (#1 West) for four years and a member of the Mediation Committee (#2 East) for an additional three years.
To his family he was known as the most unhandy man alive, but God did he try. "Trying" began and ended by purchasing the top of the line everything, fostering his reign as the world's greatest collector of "things."
Reed's friends were the handy ones, from helping remind him of long-forgotten things like the shenanigans of his youth to fixing all the stuff he broke and could not fix. He held lifelong friendships with people of many talents, traits and backgrounds.
Reed deeply despised ignorance, slow golfers, sugar-free anything, Brussel sprouts, The Beatles, cheap cigars, wearing pants at or below the belly button and the 1980s (except his children born that decade).
Besides family, friends, and Sophie - his treasured dog, Reed loved most a good meal, learning, crossword puzzles, suspenders, clothes (all clothes), a good joke or smart-ass story to make people laugh and God.
His greatest passion in life was music. Beginning with the Mexia Blackcat Band, continuing into college with the SMU Mustang Band. Throughout his life, Reed played in multiple orchestras and jazz ensembles and sang in the church choir. Music was always present in his life to the end. He even had plans to learn the bagpipes, much to his family's protest.
The family will be holding a private memorial service to honor Reed. In lieu of flowers, they ask for donations to either the First United Methodist Church of Fairfield Music Department or The Michael J. Fox Foundation for Parkinson's research.
The family would like to thank Zoleta, Jay, Ty, Lesley, Cliff, Nelda, Jackie, Jamie and Erika for the special love and care you provided the family as caregivers and nurses.
If you could measure a man by the company he kept and the life he led, Reed Jackson was off the charts.

Private memorial services are planned followed by inurnment at the Dallas-Ft. Worth National Cemetery with military honors provided by the United States Marine Corps.

In lieu of flowers, the family asks for donations to either the First United Methodist Church of Fairfield Music Department, 201 N. Mount - Fairfield, TX 75840 or The Michael J. Fox Foundation for Parkinson's Research @ www.michaeljfox.org.
Read Less

To plant a memorial tree in honor of REED JACKSON, please visit our Heartfelt Sympathies Store.

Receive notifications about information and event scheduling for REED JACKSON

Print
Private memorial services followed by inurnment at the Dallas-Ft. Worth National Cemetery with military honors provided by the United States Marine Corps.

We encourage you to share your most beloved memories of REED JACKSON here, so that the family and other loved ones can always see it. You can upload cherished photographs, or share your favorite stories, and can even comment on those shared by others.

Posted Jan 09, 2021 at 08:02pm
Reed Jackson: a brilliant, funny, unique, honest, talented gentle man. I had the privilege of working for Reed and witnessed daily how unbelievably fair and non-judgmental he was to any and everyone. His obituary was spot on. He was a man’s man, first to pour a favorite “whiskey” and to tell a joke. On the other hand, he was equally adept at single handedly listening to and entertaining a ladies’ group. His attire was immaculate; fashionable, starched, and polished. He faced any challenge with honor along with his amazing quick wit. He loved his family and his Country. I am so thankful that, after a too long a time, I ran into him a couple of years ago at a Fairfield High School football game. He made me feel like I had seen him yesterday. An incredible soul. Cheers to my friend Reed. Debbie Nesbitt Cline
Comment Share
Share via:
RG

I am truly sorry to hear about Reeds passing. Having been a friend and colleague for almost 50 years I can say without doubt that Reed was one of the most ethical attorneys I ever worked with. He was a credit to his profession. As a friend I will miss this unique individual . The world will be a lesser place without Reed. I think I'll go have a scotch in his memory.

Donald B. & Joyce A. Stoneking

Posted Dec 29, 2020 at 03:27pm
Stacy and Family,
Reed and I were squadron mates in Vietnam (1969) with HMM-265, and later at Tustin, CA.
Joyce and I met you later at a Marine Reunion.
You showed us how to clean hands by using the condensation off a glass filled with ice water.
It is small contributions, which make lasting memories and friendships.
SEMPER FI/FRIENDS,
Don/Stoney & Joyce Stoneking
Comment Share
Share via:
AK

Posted Dec 29, 2020 at 10:37am
Stacy, we are so sorry to hear of Reed’s passing. He was a Stealth among his Marine buddies. We expect he and Nat will hold the heavenly gates open for the rest of us USMC brothers to enter. A friend in passing, Semper Fi, Art Kidder
Comment Share
Share via: 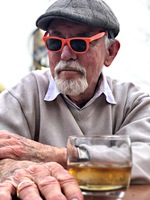