To share your memory on the wall of RANDY FLOWERS, sign in using one of the following options:

Randy loved football and followed the Los Angeles Rams with a passion. He also loved playing dominos. His grandpa taught him to play at age 10. He scored well and it thrilled him to beat the “more seasoned” players; and it happened OFTEN.

Randy was preceded in death by his father, Houston Flowers; a son, Zachary Flowers; grandparents, Clint and Lucy Mullen and Floyd and Gracie Flowers.

Receive notifications about information and event scheduling for RANDY FLOWERS

We encourage you to share your most beloved memories of RANDY FLOWERS here, so that the family and other loved ones can always see it. You can upload cherished photographs, or share your favorite stories, and can even comment on those shared by others.

I'm saddened by Randy's death he was such a good a friend to me in High School that friendship carried on after after school he could always make me laugh when I needed a friend thinking of you Nova and Randy's children. 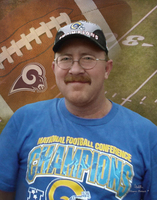