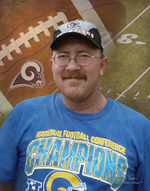 Randy loved football and followed the Los Angeles Rams with a passion. He also loved playing dominos. His grandpa taught him to play at age 10. He scored well and it thrilled him to beat the “more seasoned” players; and it happened OFTEN.

Randy was preceded in death by his father, Houston Flowers; a son, Zachary Flowers; grandparents, Clint and Lucy Mullen and Floyd and Gracie Flowers.