To share your memory on the wall of CLAUDETTE HICKS, sign in using one of the following options:

To plant a memorial tree in honor of CLAUDETTE HICKS, please visit our Heartfelt Sympathies Store.

Receive notifications about information and event scheduling for CLAUDETTE

We encourage you to share your most beloved memories of CLAUDETTE here, so that the family and other loved ones can always see it. You can upload cherished photographs, or share your favorite stories, and can even comment on those shared by others.

Posted Dec 12, 2020 at 03:07pm
I am very sorry about Claudine. As a child growing up in Teague, she was always very nice and patient, when I would know on the back door of the house of her and Dr. Allen. RIP.
Comment Share
Share via:
CA

Posted Dec 11, 2020 at 01:00pm
I remember Claudette from way back. We all gathered at Mama Black's house when we were kids. Tho I was not related to them, that made no difference. Everyone was welcome, there was always a houseful, so much fun playing, good food and much love.
Claudette was the cutest little short girl and was always dressed so elegant .

Posted Dec 11, 2020 at 09:31am
I am so sorry to hear this news. Claudette was one of a kind for sure. Always so happy and nice. She always treated me like her best friend. Loved her bubbly self and was always so classy
Comment Share
Share via:
LC

Posted Dec 10, 2020 at 04:21pm
WOW! I can not even process she is gone!! I just had lunch with her the week before Thanksgiving. The best lunch ever! We sat and talked for over 2 1/2 hours. I loved her so... her smell, her cooking, her entertaining, and of course her being down right honest with me! lol.. She was truly one of a kind! I appreciated every bit of her!! I will forever remember her advise and time she shared with me. Bentley.. Brad, Greer, Holden & Erin you had the best .. there was never a conversation that she did not mention you guys. Sharing in your sorrow.. and praying for comfort and peace forward.
Tears,
Lisa Cothran
Comment Share
Share via: 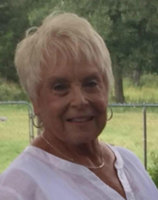